Thank you for your participation in this day to learn and get to know each other. The second Jazz Composers Workshop will be coming in a few months! 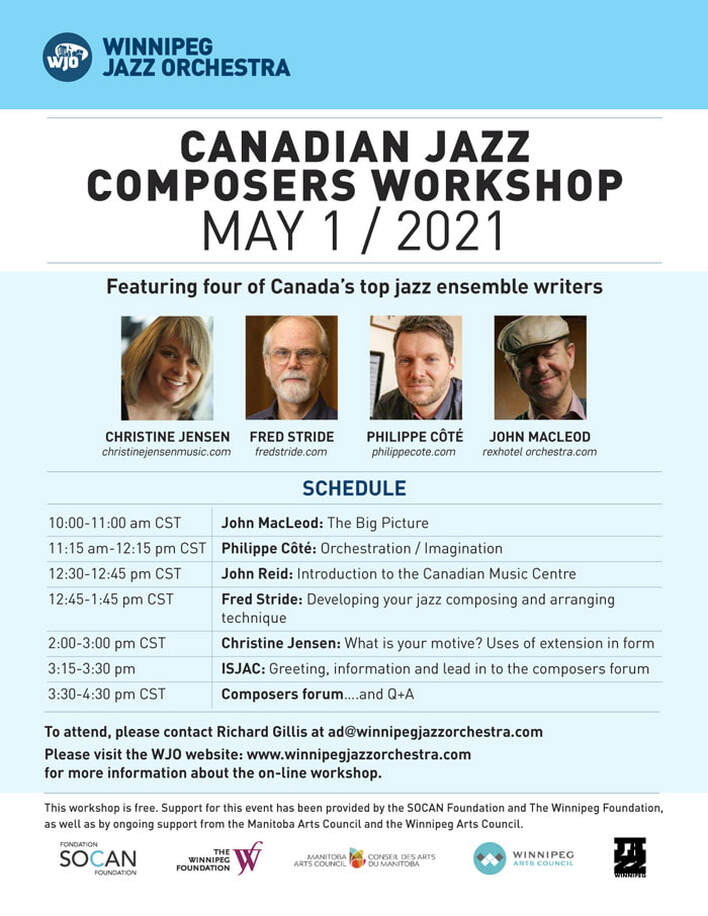 poster for the Canadian Jazz Composers Workshop
From 10 am to 4:30 pm Central Daylight Time
Topics will include Nurturing creativity and originality, Orchestration, Developing your arranging “chops”, and Taking the leap from small group to large jazz ensemble writing.
To register, please contact Richard Gillis at ad@winnipegjazzorchestra.com.  An email with more information and links to the event will be sent to you a day or two before the workshop.

Montreal-based Christine Jensen (http://christinejensenmusic.com) is one of Canada’s foremost big band composers, described as “an original voice on the international jazz scene” (Mark Miller: Globe and Mail). She has studied with Pat LaBarbera, Kenny Werner, Jim McNeely, Remi Bolduc, Dick Oatts and Steve Wilson, and has collaborated with a diverse array of musicians, including Geoffrey Keezer, Lenny, Pickett, Brad Turner, Karl Jannuska, François Théberge, Gary Versace, Donny McCaslin, Steve Amirault, Franck Amsallem, and Joel Miller.
​
Fred Stride (https://www.fredstride.com) has won many awards for his work as a composer and arranger, including the International Jazz Arranging Competition and the SOCAN/IAJE Phil Nimmons Established Composer Award. He has written countless arrangements and compositions for various ensembles: most recent commissions include “The Saskatchewan Suite” by the Regina Jazz Society and “Four Stellar Jays” by Vetta Chamber Music.

Montreal-based Philippe Côté (http://philippecote.com) is a musical explorer at the crossroads of jazz and classical. He has composed for Orchestre national de jazz de Montréal, Winnipeg Jazz Orchestra, Ensemble Paramirabo, and has collaborated with Quatuor Saguenay and New York pianist Marc Copland.
Praised as "a grand, sweeping accomplishment by the Ottawa Citizen, Lungta, his first album of original compositions for jazz quintet and wind orchestra, was produced by renowned American saxophonist David Binney.

John MacLeod (https://rexhotelorchestra.com/) has led a distinguished career spanning 40 years on the Canadian music scene. His first major national and international exposure was as a soloist with  Rob McConnell and the Boss Brass, beginning in 1983. His playing can be heard on many Boss Brass albums including 2 Grammy Award winners. John’s big band arrangements can be found in the repertoires of professional and student groups all over Canada, the U.S.A.  Europe and Asia. He has also completed several orchestral projects which he has conducted at Roy Thompson Hall and the famous Carnegie Hall in New York City. John’s big band The Rex Hotel Orchestra was formed in 2003 and performs monthly at the Rex in Toronto.  They have recorded 3 CDs, the most recent THE TORONTO SOUND was released at a JazzFm91 gala concert in November 2017, and their debut album OUR FIRST SET was awarded a Juno for the best jazz album of year 2011. John is also active as an educator, teaching at both U of T, and Humber College.