Trombones
I chose the trombone because the trombone players
in the marching band got to be up front with the majorettes
(because of the slides) and I loved that!
Quincy Jones
​ 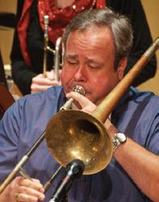 FRANÇOIS GODÈRE is originally from Sherbrooke, Québec. A background in his church choir as a singer, an organist and a conductor provided the fertile ground in which his love for music has flourished. Studies in modern trombone followed with Mr. Ted Griffith and Mr. Peter Sullivan at McGill University, in Montréal. He has held jobs with the Victoria Symphony (B.C.), the Kwa-Zulu Natal Philharmonic (Durban, South Africa) and the Malaysian Philharmonic Orchestra (Kuala Lumpur, Malaysia). François can be heard on several MPO recordings, most notably for his solo work on Nikolai Rimsky-Korsakov’s Russian Easter and Scheherazade. A multi-faceted musician, his pursuits include jazz trombone, orchestral and baroque music. He as also spent three years teaching trombone for Sistema New Brunswick before coming to Winnipeg and the joining the RCAF Band in 2014. 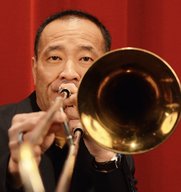 BRAD SHIGETA moved to New York City in the fall of 1990 via Montreal. Upon arriving in New York City to study with trombonist Jimmy Knepper, he met legendary Count Basie Orchestra trombonist Benny Powell. Through Benny, he was introduced to Clifford Jordan and was groomed by Benny to take over his chair in the Clifford Jordan Big Band. This led to many international and national tours as well as recordings and film scores with the Illinois Jacquet Big Band, the Dave Holland Big Band, the Lincoln Center Jazz Orchestra, Vince Giordano and the Nighthawks and the Duke Ellington Orchestra under the direction of Mercer Ellington. He currently can be heard re-creating Jack Jenny and Jack Teagarden solos on the soundtrack for Martin Scorsese’s blockbuster movie:The Aviator in the fall of 2004, as well as on the newly released CD of swing standards by Danny Aiello. In the past few years, Brad has been able to return to the roots and the music that originally attracted him to become a musician: Traditional and Swing music. He is currently in a Duke Ellington alumni small group under the direction of Barrie Lee Hall, as well as a regular member of Vince Giordano’s Nighthawks (music of the 10’s, 20’s), John Gill’s Jazz Kings (traditional New Orleans music) and the Manhattan Ragtime Orchestra in New York City.
D’ARCY MCLEAN is a committed musician and educator who received a Bachelor of Music in Music Education degree from the University of Saskatchewan. D’Arcy also studied in Toronto with jazz musicians Pat Labarbara and Don Johnson. Currently a teacher in Lac du Bonnet, D’Arcy finds time to travel to Winnipeg to perform with local ensembles such as the Ron Paley Big Band and the WJO. His work with these groups has allowed him the opportunity to appear with artists such as Louie Bellson, Bill Watrous, Bob Brookmeyer, Frank Foster and Guido Basso. 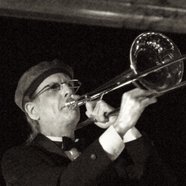 JEFF PRESSLAFF is a pianist, trombonist, and composer/arranger has become a mainstay of the Winnipeg jazz scene since moving from New York in 1997. Born in Manhattan, educated at Princeton and Wesleyan Universities, he has had a varied career working with many distinguished musicians, including Benny Carter, Bill Barron, Ed Blackwell, Roswell Rudd, Sheila Jordan, Bob Brookmeyer, Howard Levy, Stanley Jordan, Bill Watrous, George Garzone, Steve Nelson, Edgar Meyer, Sim Cain, The Temptations, The Four Tops, Josh Groban and many others. In 2004, he was named Jazz Winnipeg's Musician of the Year. Jeff is featured as a player, writer and/or producer on many recordings. The Complete Rebirth of the Cool was nominated for a 2014 WCMA Jazz Album of the Year award; Rhapsodies by Two, an album of keyboard duets with Will Bonness was nominated for a 2013 WCMA Jazz Album of the Year award; Red Goddess, a piano trio album of all original tunes garnered a 2009 Best Instrumental Jazz nomination from Just Plain Folks, the world's largest music awards.

​JOEL GREEN Prior to moving to Winnipeg, trombonist Joel Green spent a decade as a freelance
performer and teacher in Toronto. A graduate of Humber College and the University of Toronto,
he studied with renowned trombonists Alastair Kay and Gordon Wolfe. While freelancing in
Toronto, his work included performances with personalities such as Frank Sinatra Jr., Michael
Bublé, Andrea Bocelli, Gladys Knight, Colin James, Roger Hodgson and Frankie Valli. In the course
of his freelance career, Joel has played on countless recordings in a wide variety of genres and for
major television and radio broadcasters. An experienced pit orchestra musician, he has performed
in dozens of musicals, including South Pacific, 9 to 5, Wicked, Fiddler on the Roof, The Full Monty and Dreamgirls. Joel has appeared as a soloist with classical and contemporary ensembles and has
performed with the Toronto Symphony Orchestra, the Winnipeg Symphony Orchestra, Orchestra
London, the Kingston Symphony, Contact Contemporary Music and Array Music Ensemble. In 2012, Joel joined the Royal Canadian Air Force Band where he is currently a member of Command Brass, the only full time brass quintet in the Canadian Armed Forces.