Rhythm
Rhythm is something you either have or don't have,
but when you have it, you have it all over.
Elvis Presley

WILL BONNESS (piano) is a highly sought after pianist on the Winnipeg jazz scene. Currently
Assistant Professor of Jazz Piano at the Desautels Faculty of Music, Bonness started his professional
career right out of high school touring with the late Maynard Ferguson and his Big Bop Nouveau Band. Since leaving the band, Will has gone on to become a staple on the Winnipeg music scene in several genres. In addition to his teaching and solo work, he performs regularly with the Winnipeg Symphony Orchestra, the Manitoba Chamber Orchestra, and many other groups. 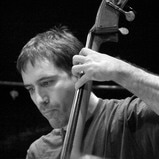 GILLES FOURNIER’S versatility on 4, 5 and 6 string electric basses, string bass, his skills and
sharp-eared adventurous musicianship positions him as one of the most in demand musicians
locally and abroad. He is extremely fluent in most languages of music from world beat to jazz and has worked as a professionally for over 30 years as a performer, band leader, composer, producer and educator. He has performed and/or recorded with jazz greats such as Clarke Terry, Arturo Sandoval, Tito Puente, Bud Shank, Denzal Sinclaire, Eddie Henderson, Kenny Wheeler, Bobby Hutcherson, Peter Appleyard, Marvin"Smitty"Smith, Terri-Lynne Carrington, Bucky Pizzarilli, Kevin Eubanks, Attila Zoller, Christian Escoude,Paquito D’Rivera, Phil Nimmons , Steve Coleman, Stanley Cowell, Rob McConnel and PJ Perry to name a few. In addition to leading his own distinctive Sextet and funk/R&B band Ego Spank, he has performed and recorded with diverse local groups and talents such as The Winnipeg Jazz Orchestra, Glenn Buhr, Dry Bones, Papa Mambo, Marco Castillo and among countless others. Gilles has gained notoriety in the symphonic
​music world, having participated in the Winnipeg Symphony Orchestra's New Music Festival. 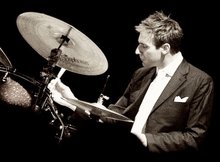 ROB SIWIK For over 25 years, drummer Rob has been an active participant in Winnipeg's jazz community. Over that time, he has played with many of the city's finest including Ron Paley, Knut Haugsoen, Larry Roy, Walle Larsson and The Winnipeg Jazz Orchestra. Rob has also had the opportunity to perform at jazz festivals in Montreal, Saskatoon, Edmonton and Vancouver as well as tour across Canada and the U.S. in the Royal Winnipeg Ballet's production of A Cinderella Story. Highlights of Rob's career also include sharing the stage with jazz legends Frank Foster, Bob Brookmeyer, Bill Watrous, and Clark Terry